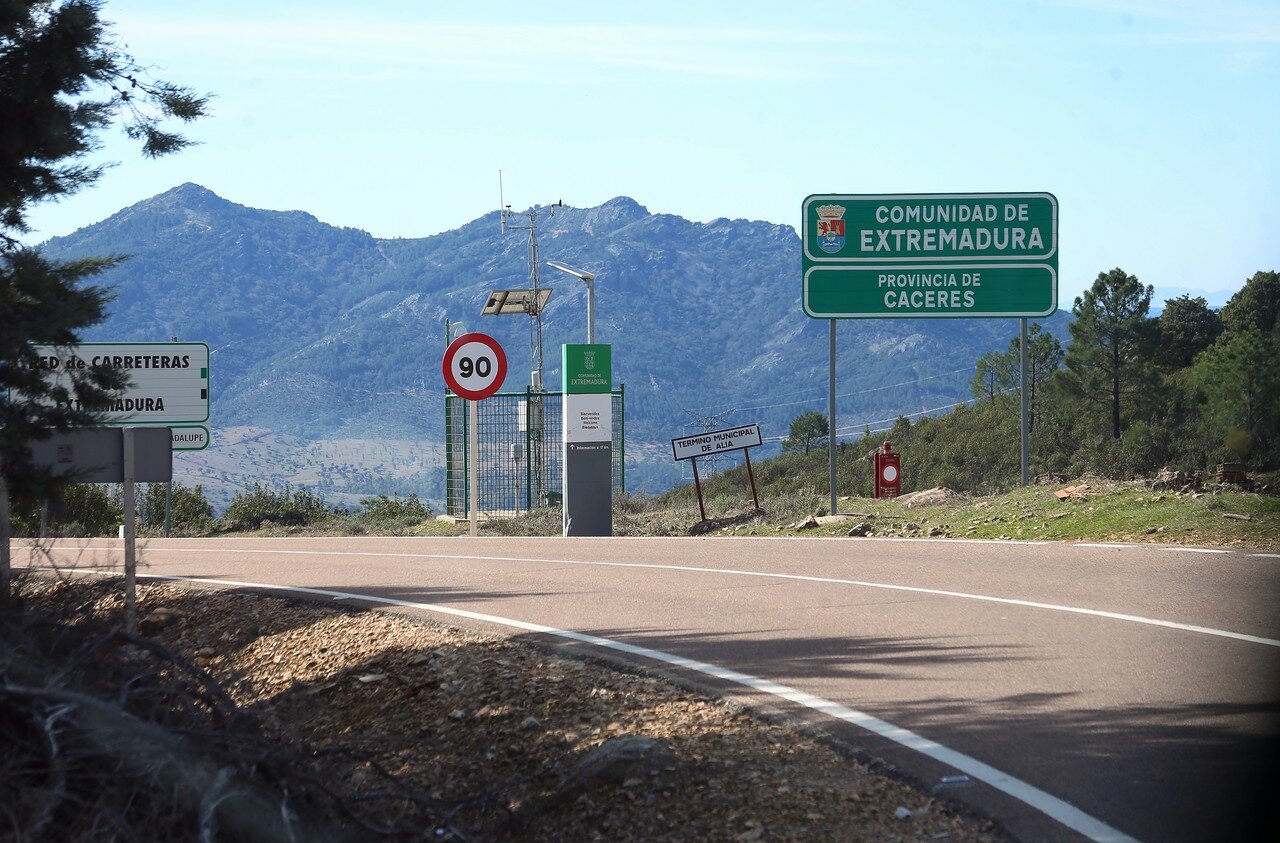 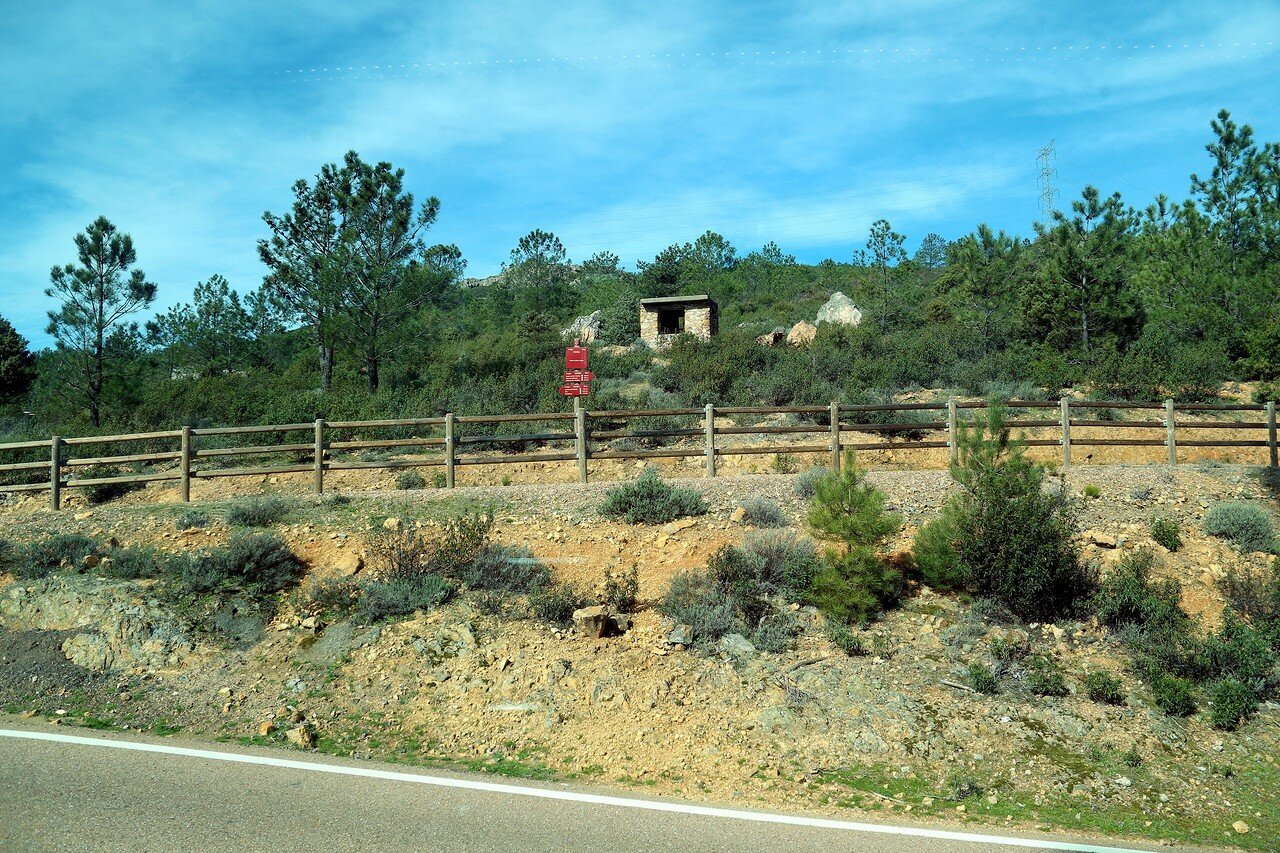 The signs on the post reported that there are Hiking trails through the Villuercas natural park. 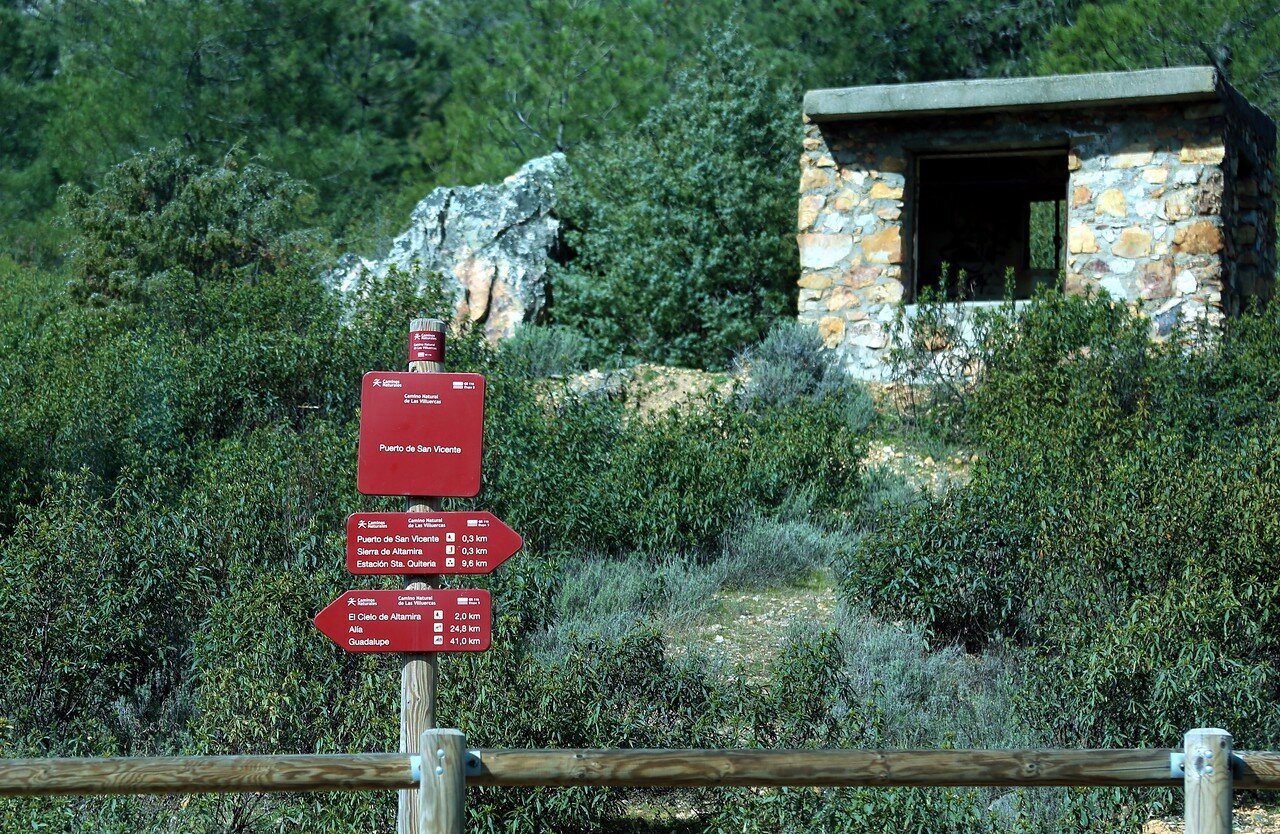 Extremadura is poorly represented in the mass multilingual guidebooks, but this region is very popular among Spaniards - in two weeks of travel in this region I almost did not meet English-speaking and Chinese tourists and even ubiquitous Germans. And Russian speech is heard only through the month in Ronda. 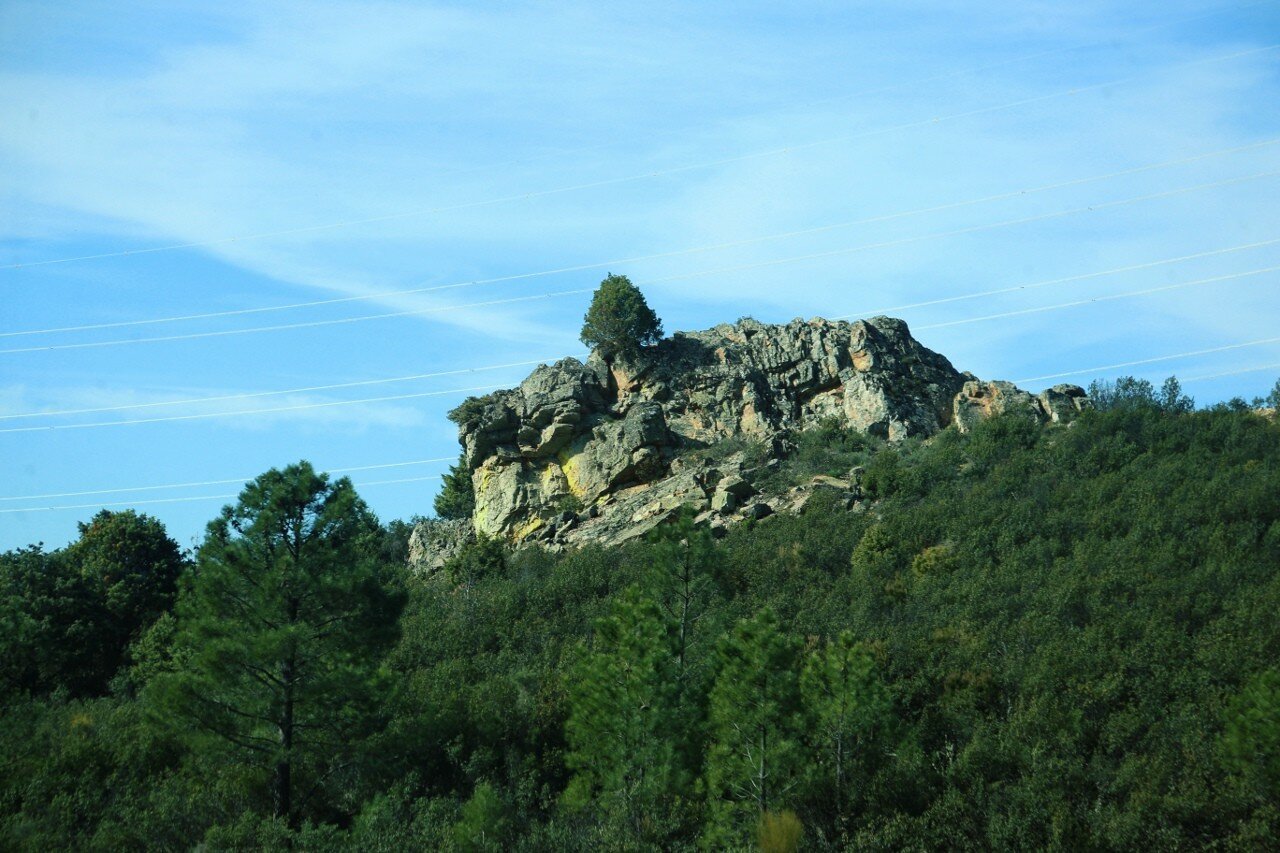 The landscape outside the bus window promised interesting views. 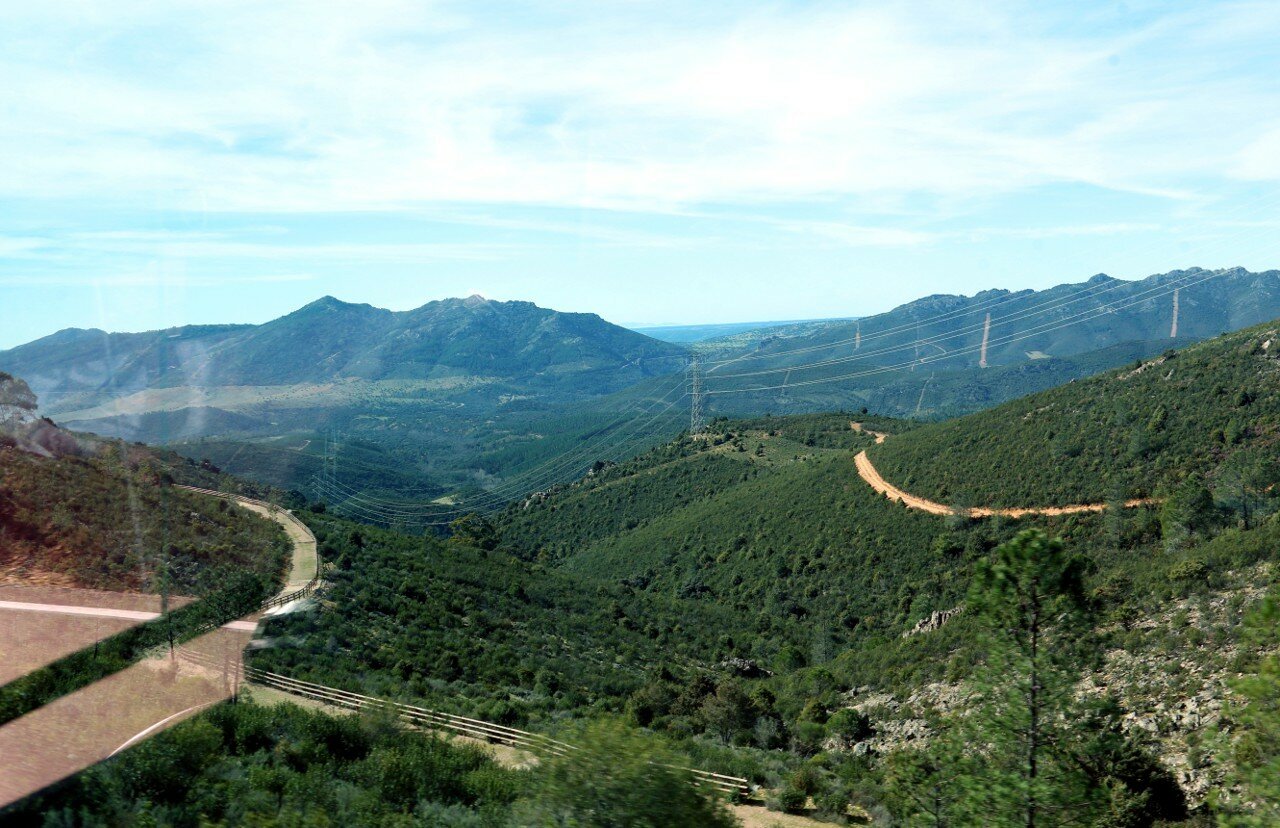 But when the bus moved on, added to the species and the thrill of driving on a mountain serpentine. 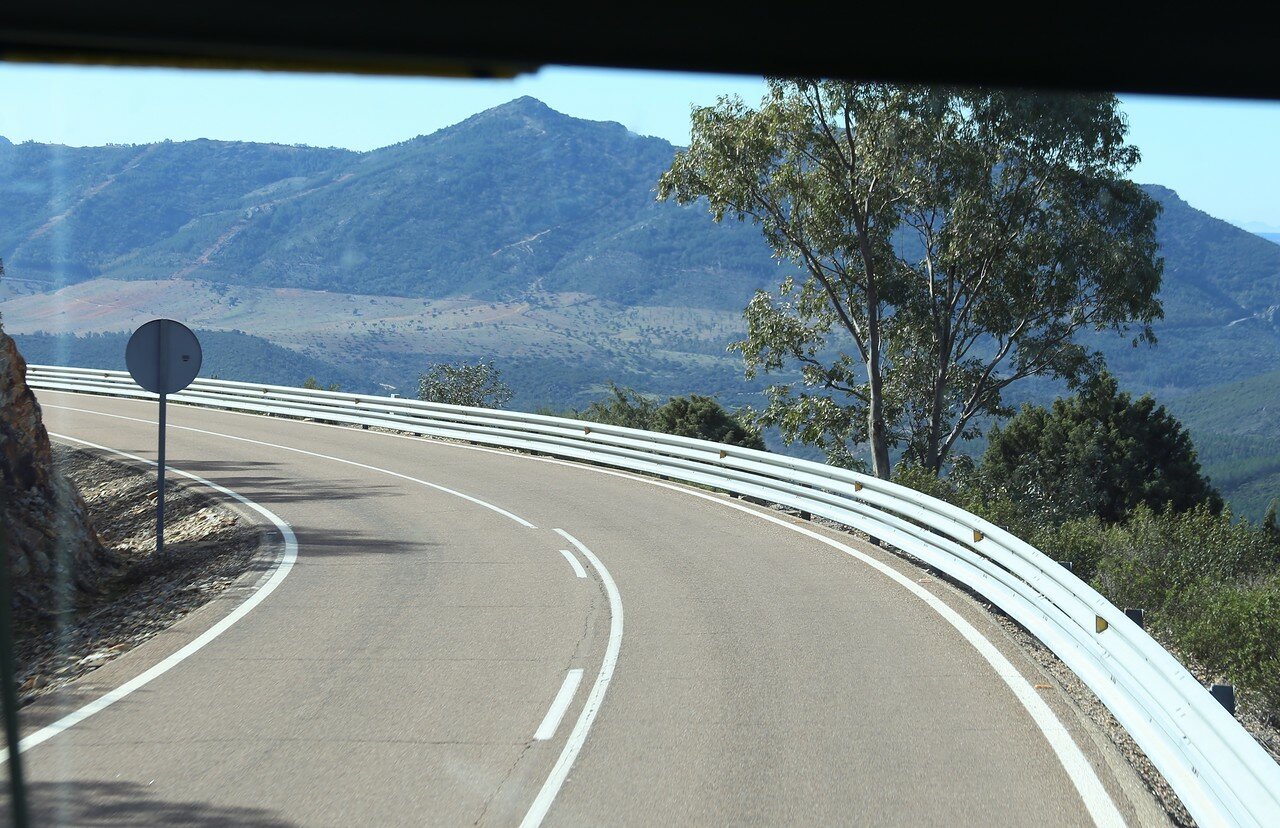 Despite the fact that periodically I had to grab the armrest and the back of the previous seat, I managed to shoot something. 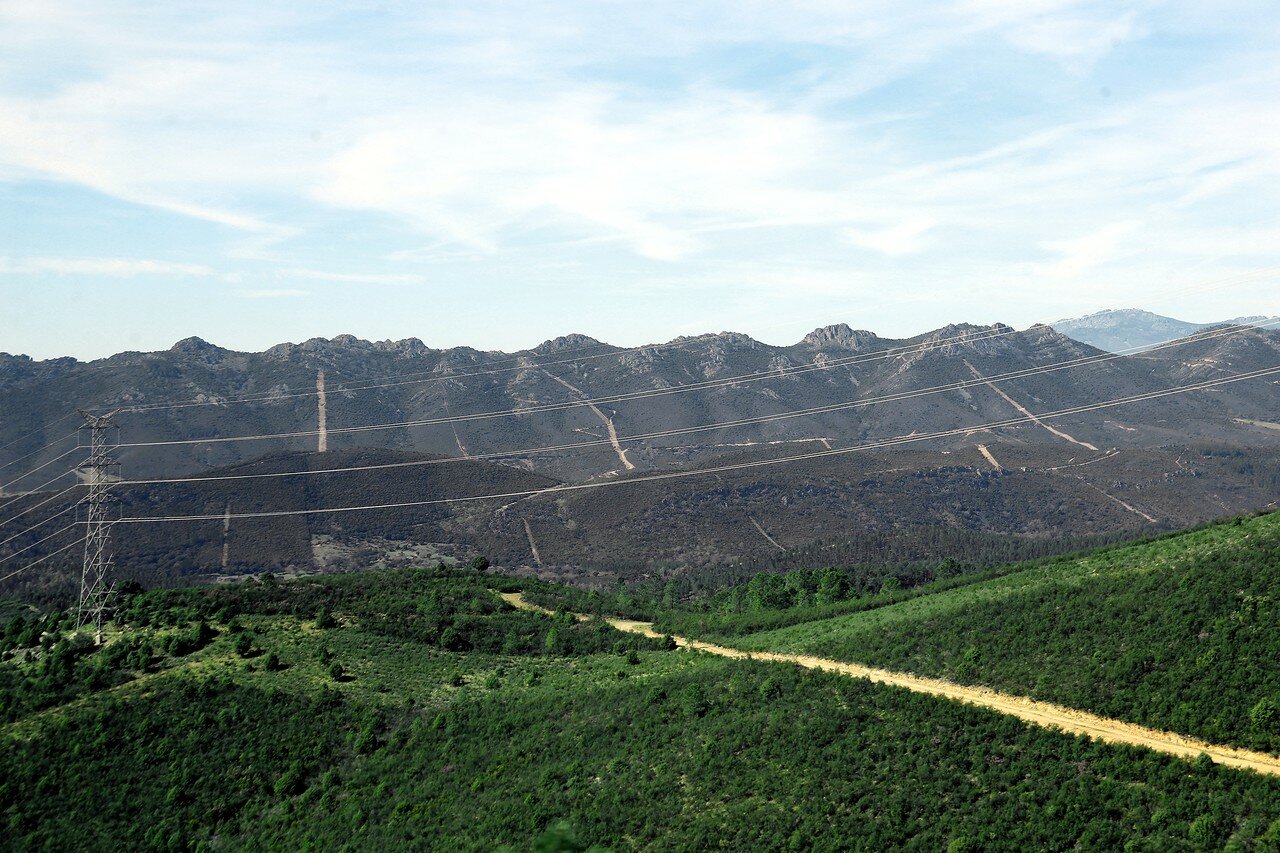 The pictures outside the window is really pleasing look. 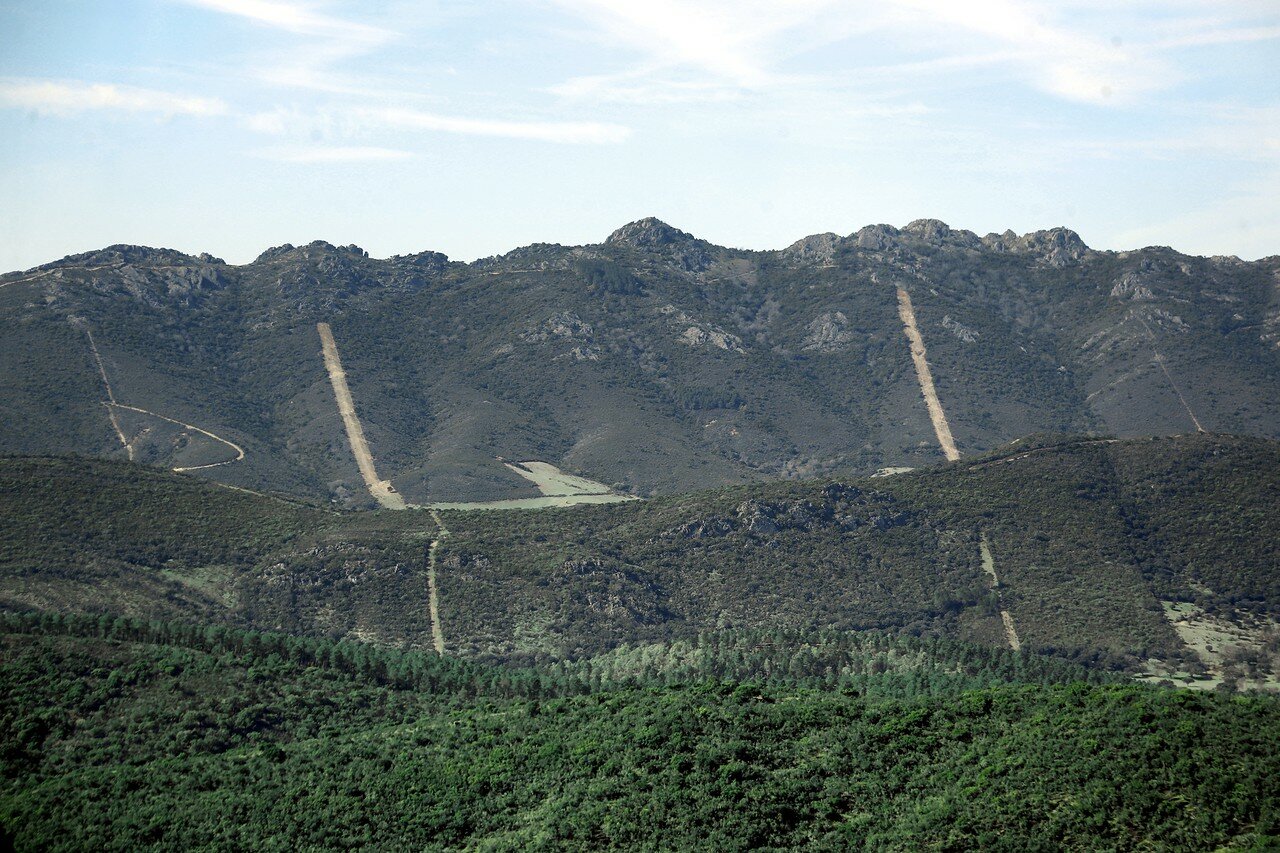 Gentle mountains covered with forest, not often seen in Spain, it is usually bare rocks with steep cliffs. 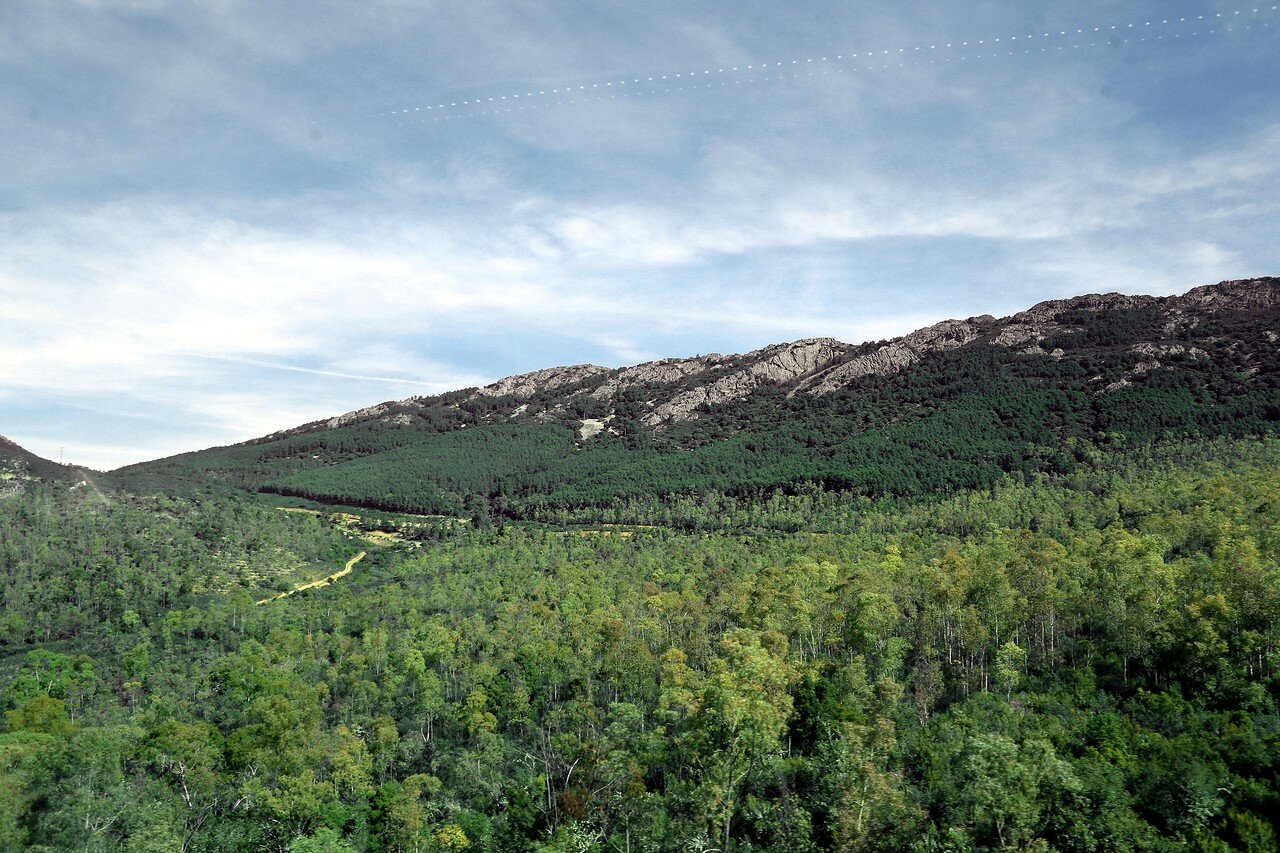 The rocks were here, but not intimidating. I think this is a great area for hiking, accessible to people of all ages. 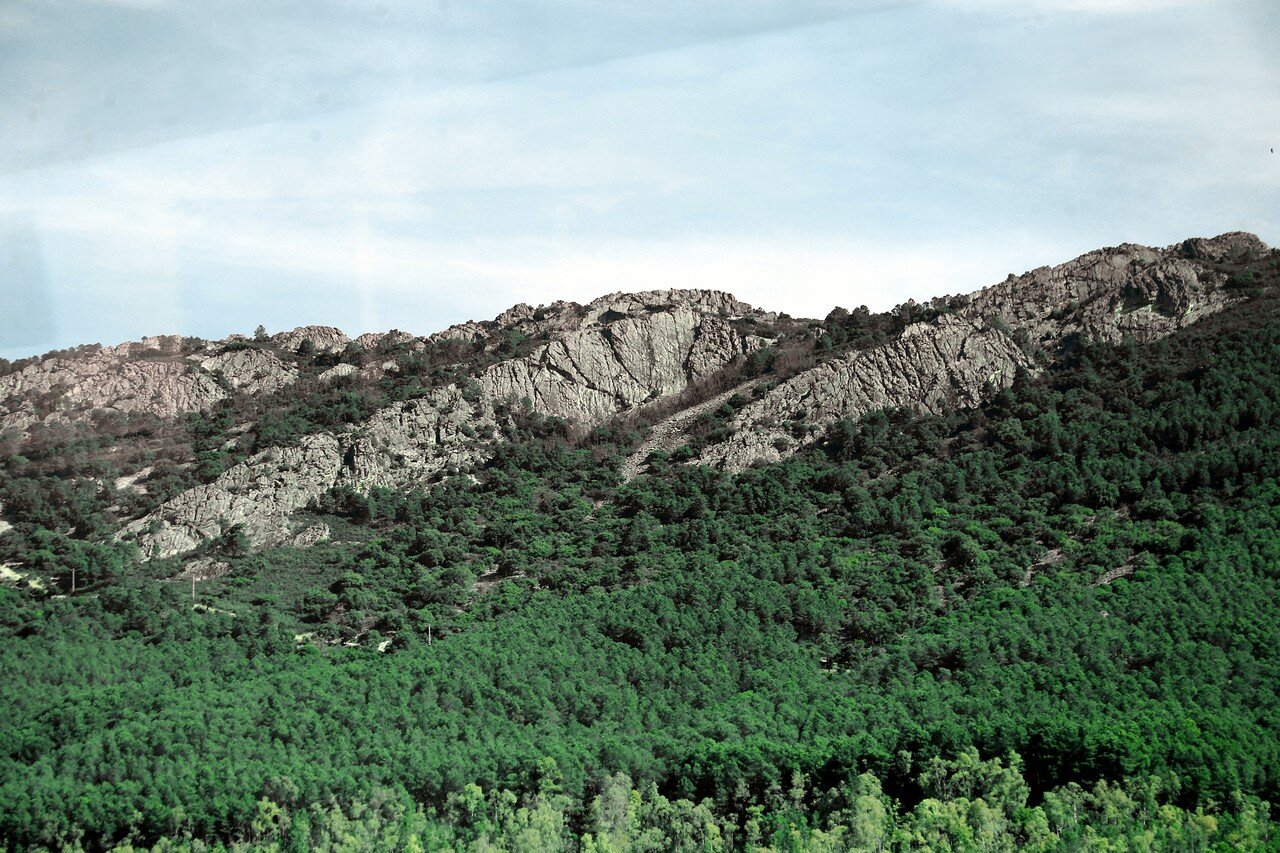 We are going on the regional highway EX-102, it belongs to the Council of Extremadura and connects Guadalupe with the province of Toledo. 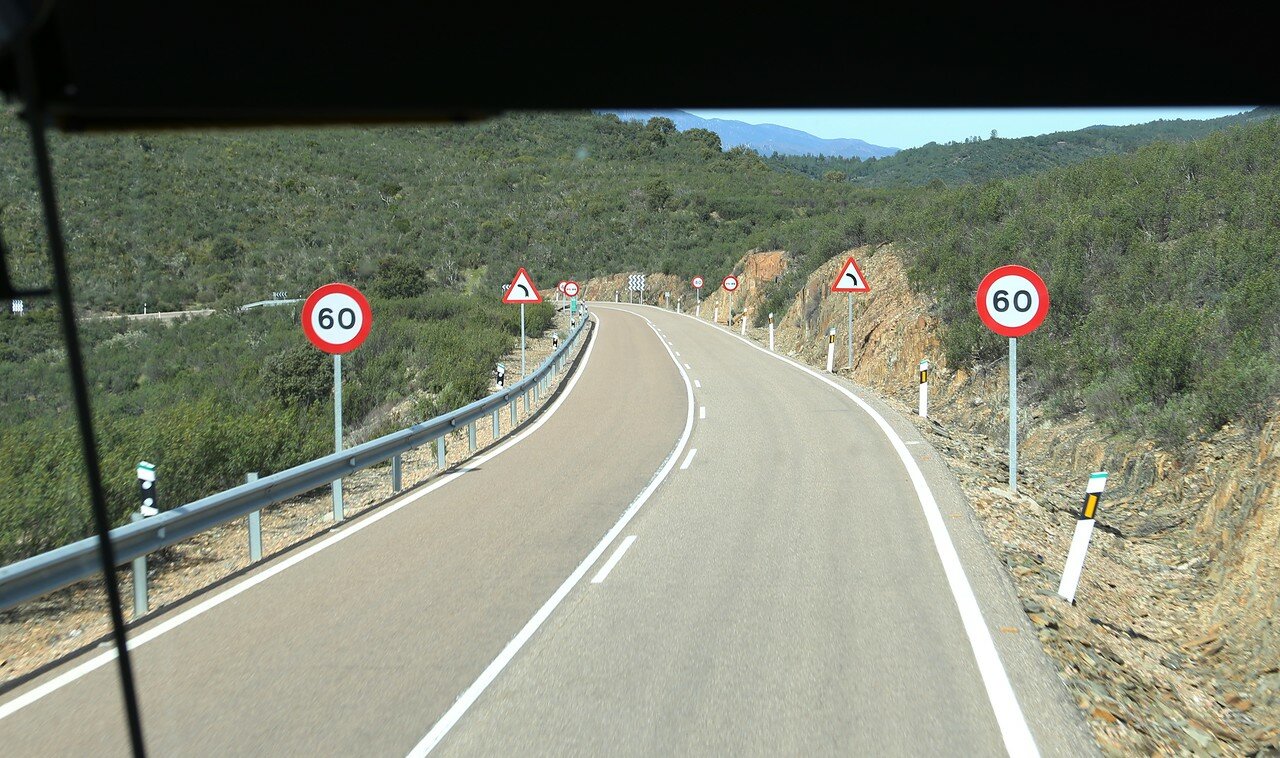 The road is of excellent quality, but consists mainly of sharp turns. 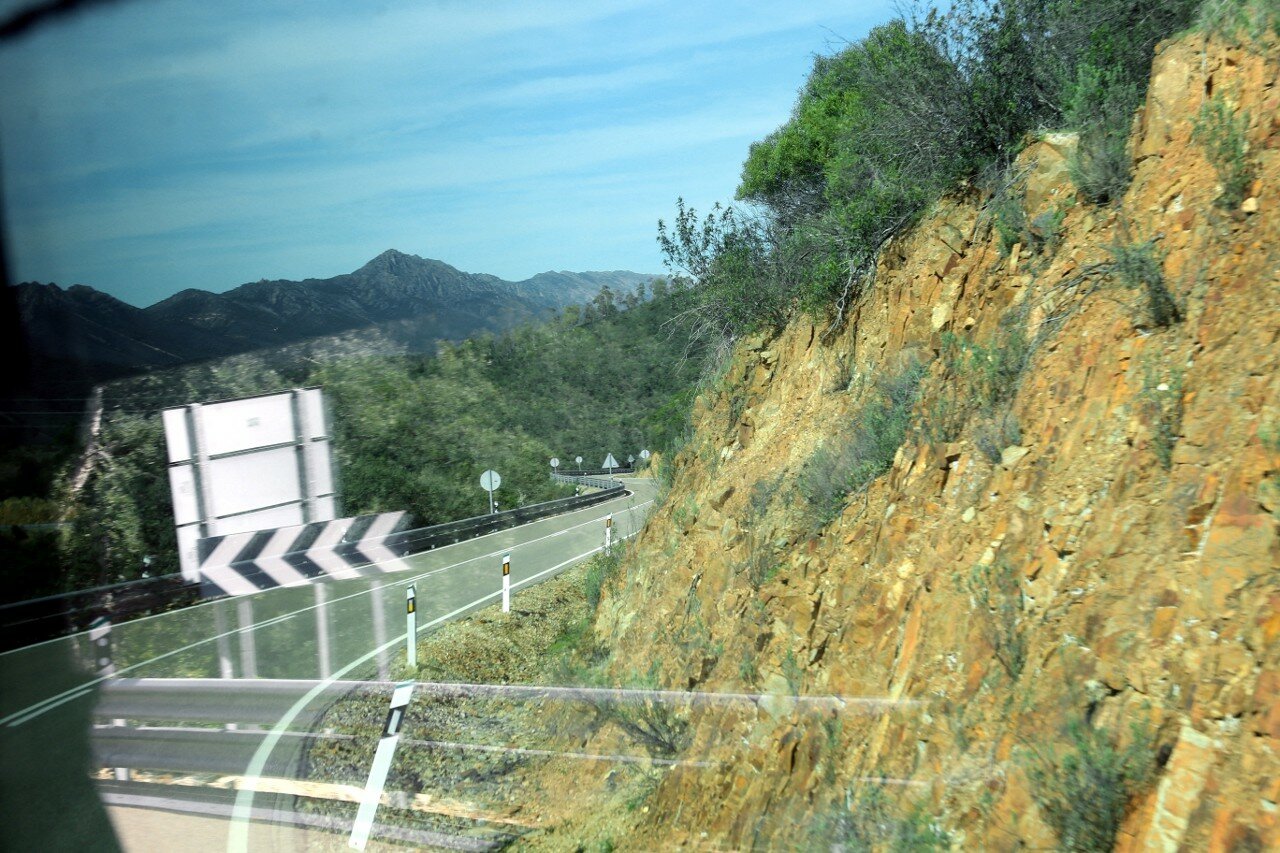 I saw not a single oncoming car, and decided that taking me in a terrible wilderness. 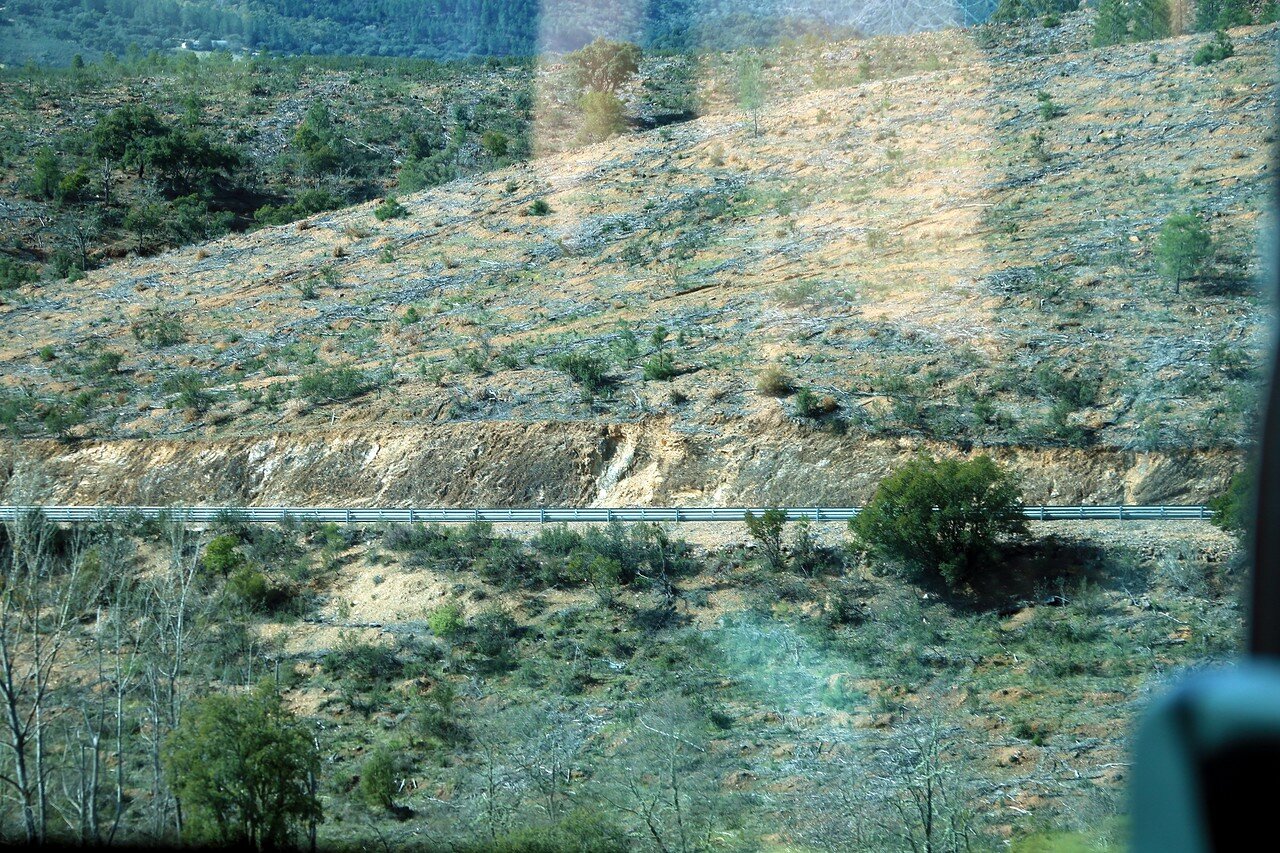 Old stone bridge over the Guadarranque river, the highway passes through the new bridge. There is almost no water in the river - the winter rains have long passed, and the spring was still far away. 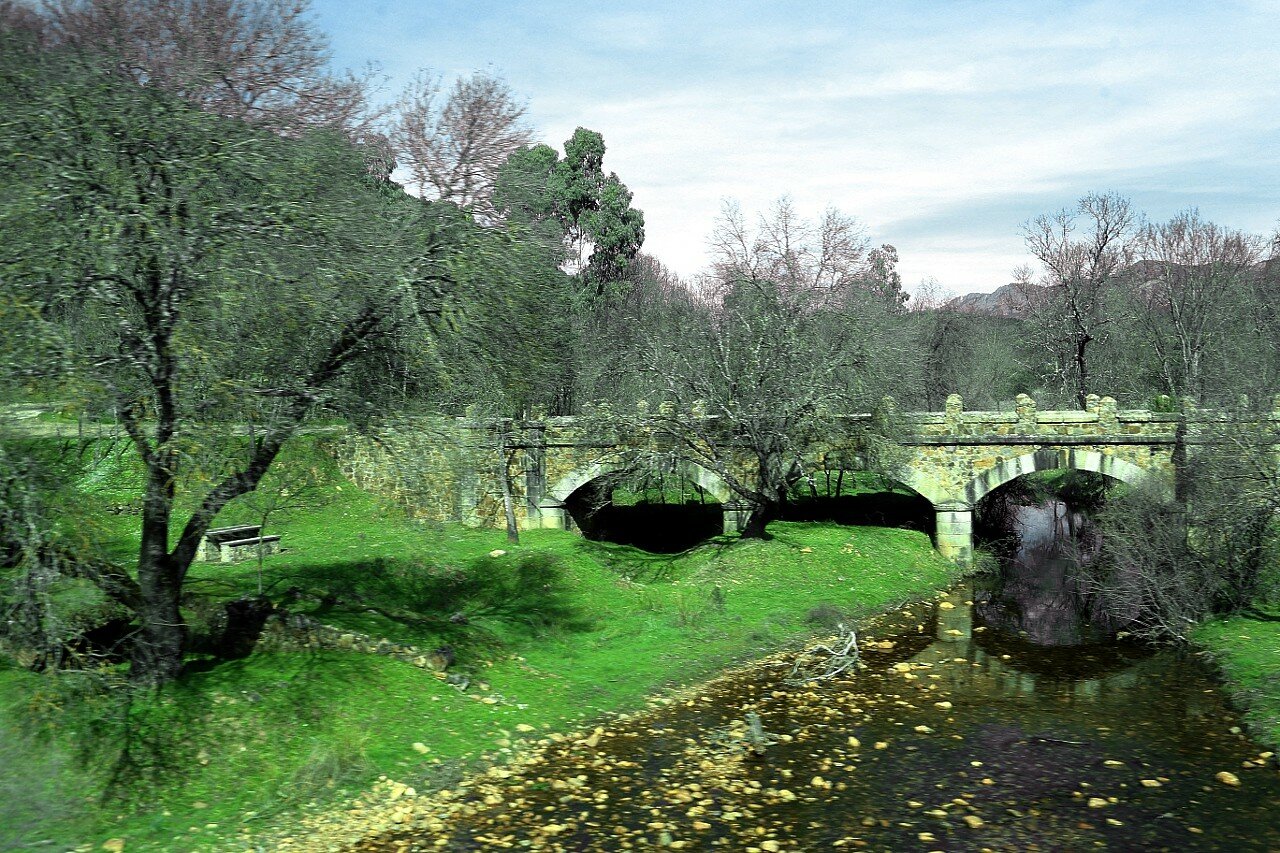 Along the road there were no signs of human habitation, with the exception of single farms, and they looked abandoned. 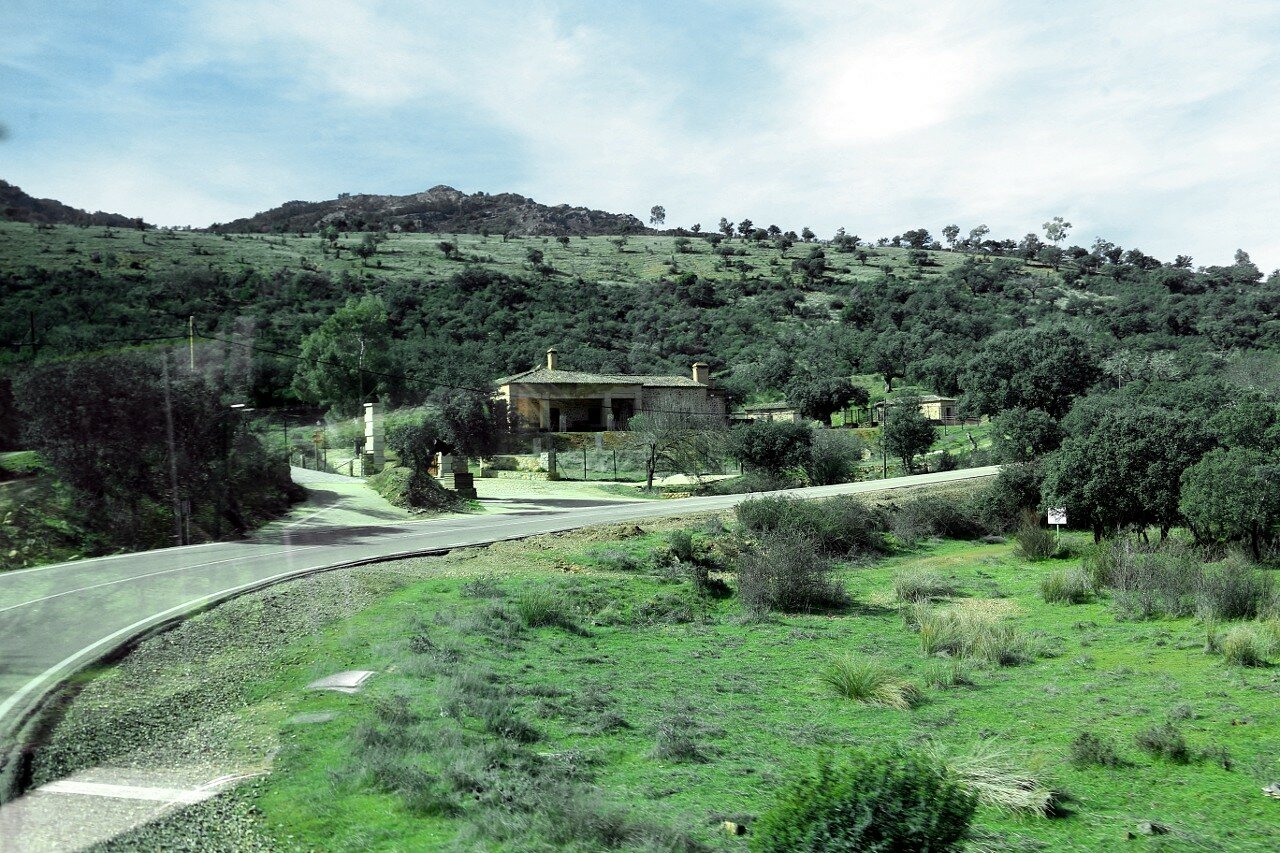 No traces of agricultural activity were also observed. 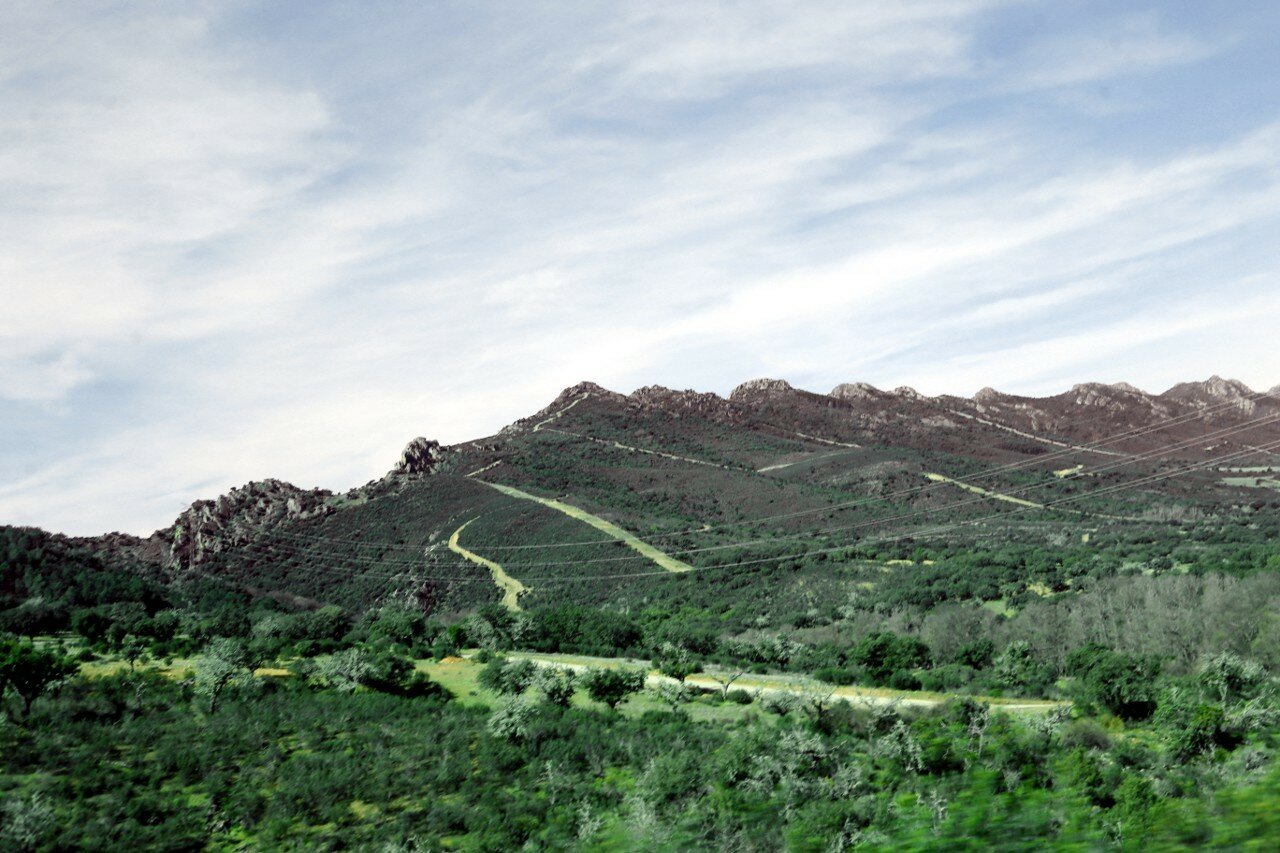 After a few kilometers the mountains have become steeper and higher. 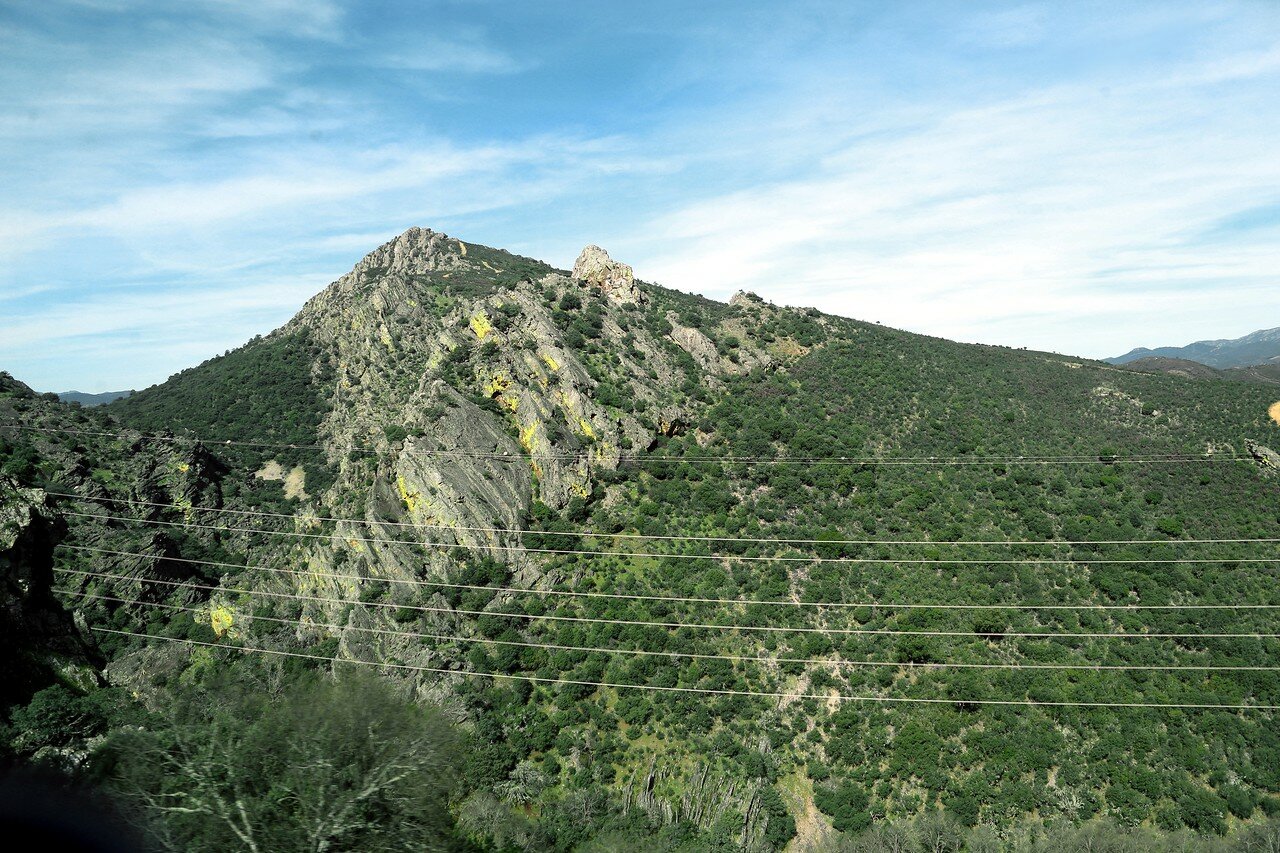 And the forest was replaced by shrub. 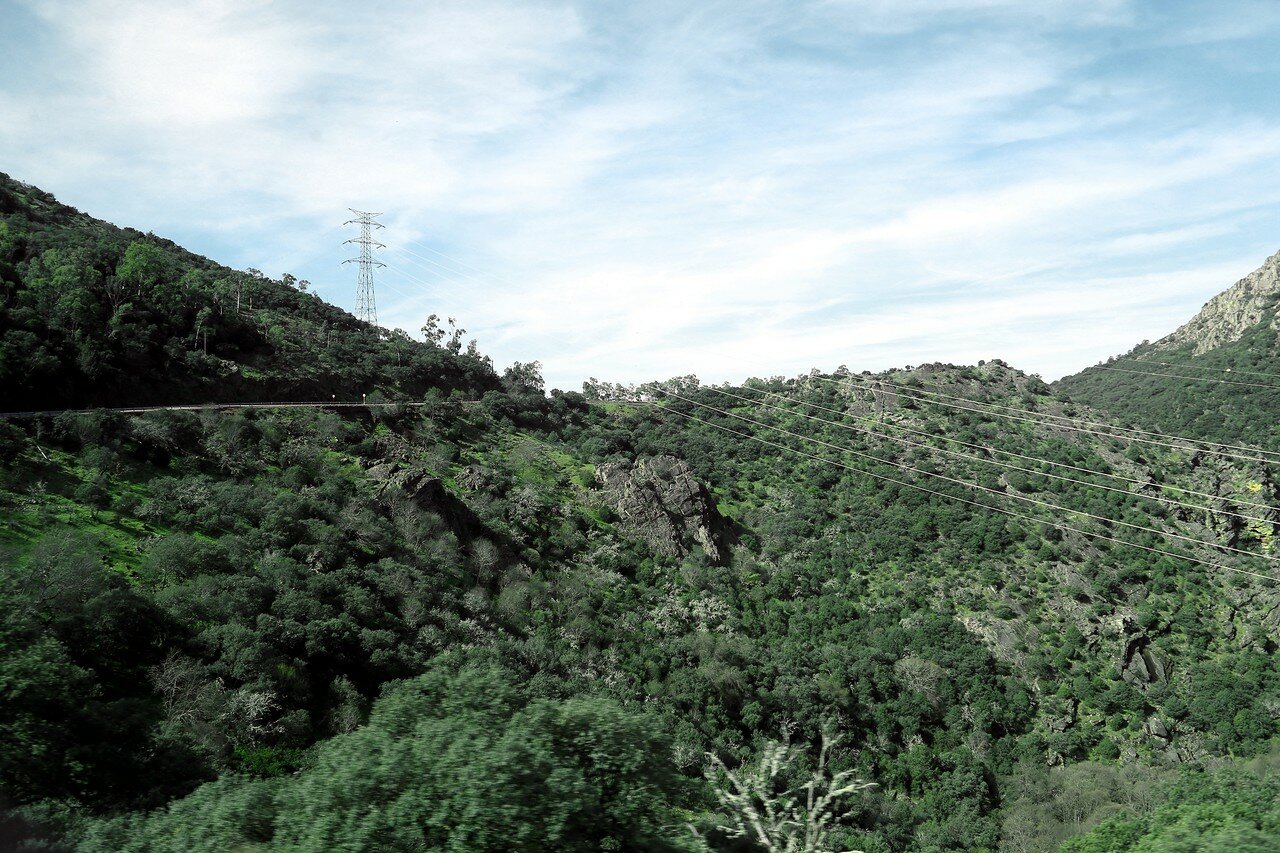 The bus climbed the mountain pass. 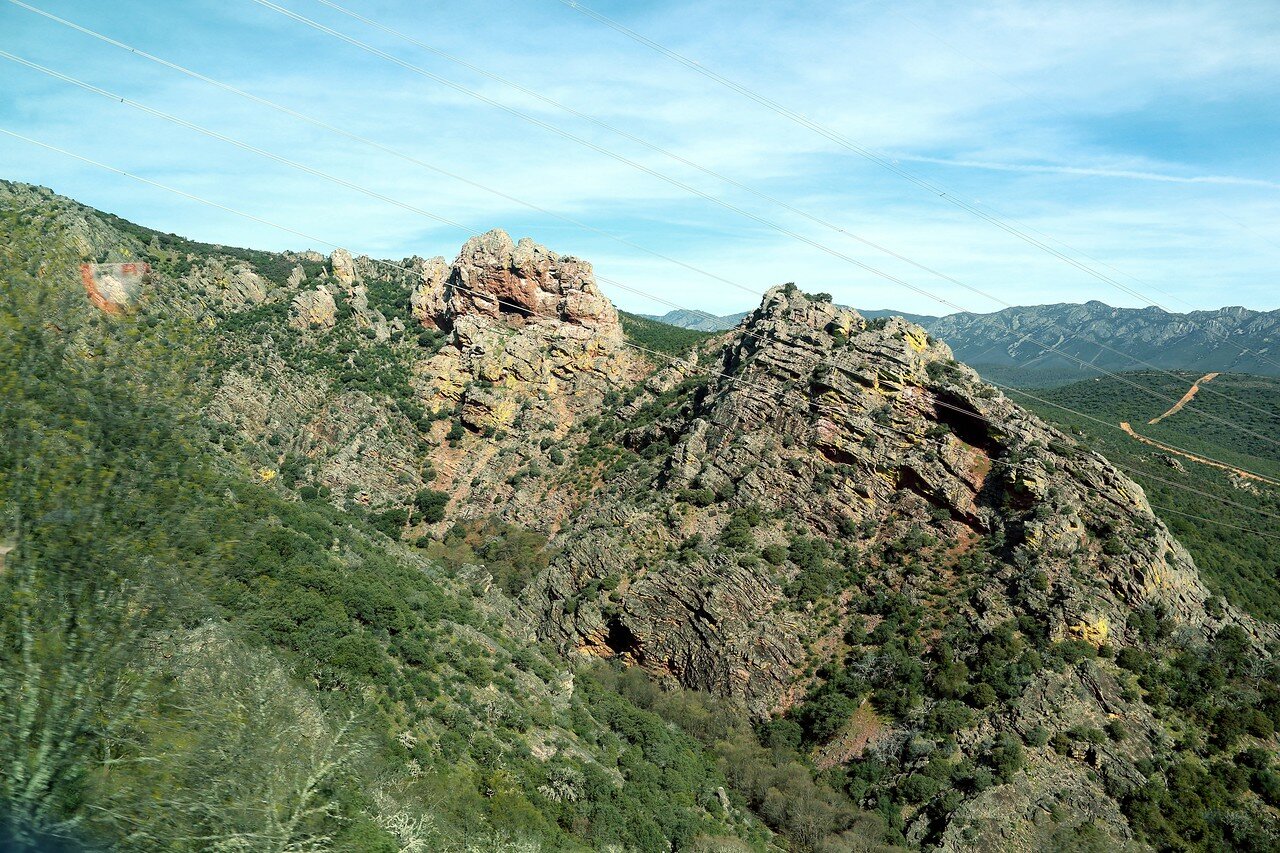 Here was a completely bare rock. Although the height is small, the track Navigator was showing swings between 450 to 700 meters above sea level. 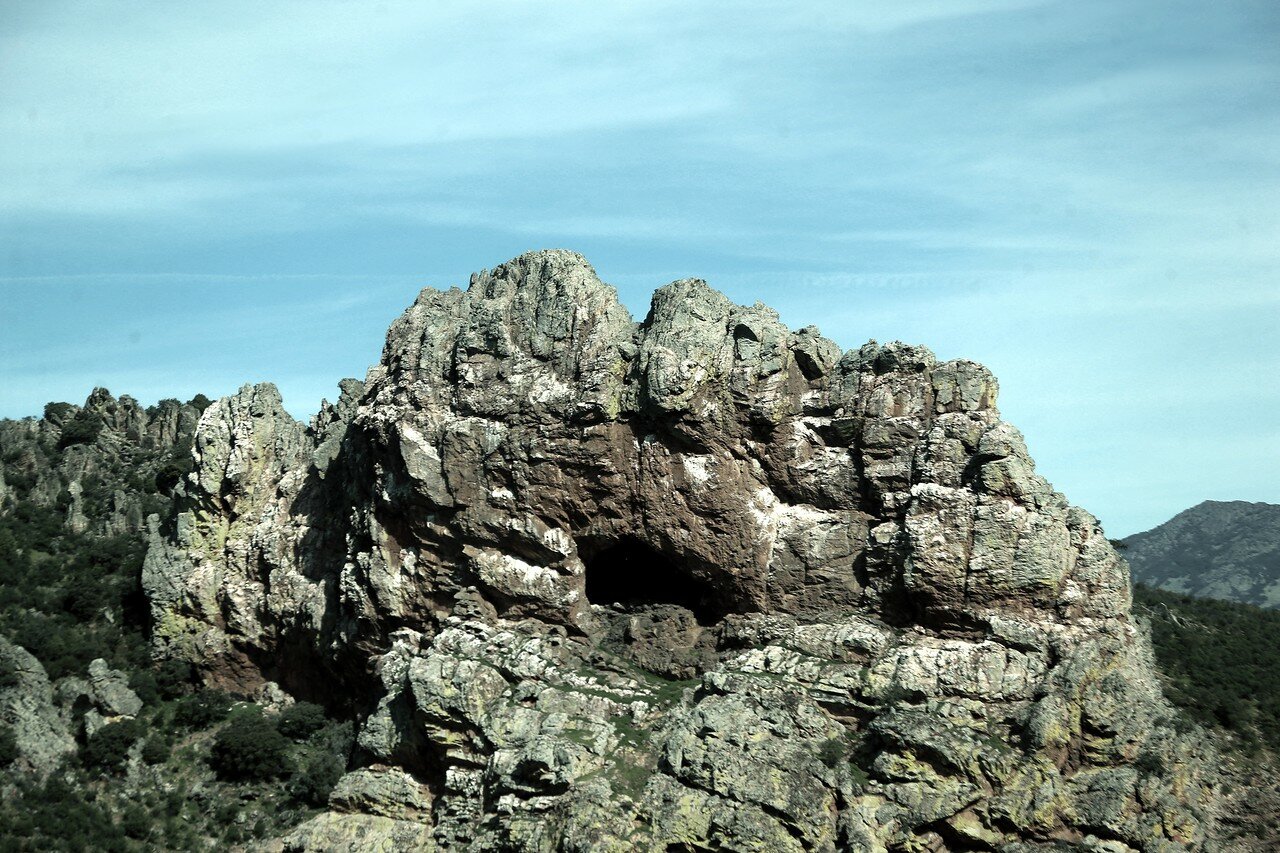 From the top of the pass we had a magnificent view of the mountain valley, stretching between two ridges of mountains Villuercas. Here originates the already familiar river Guadarranque, which flows into Guadiana, the main river of Extremadura. 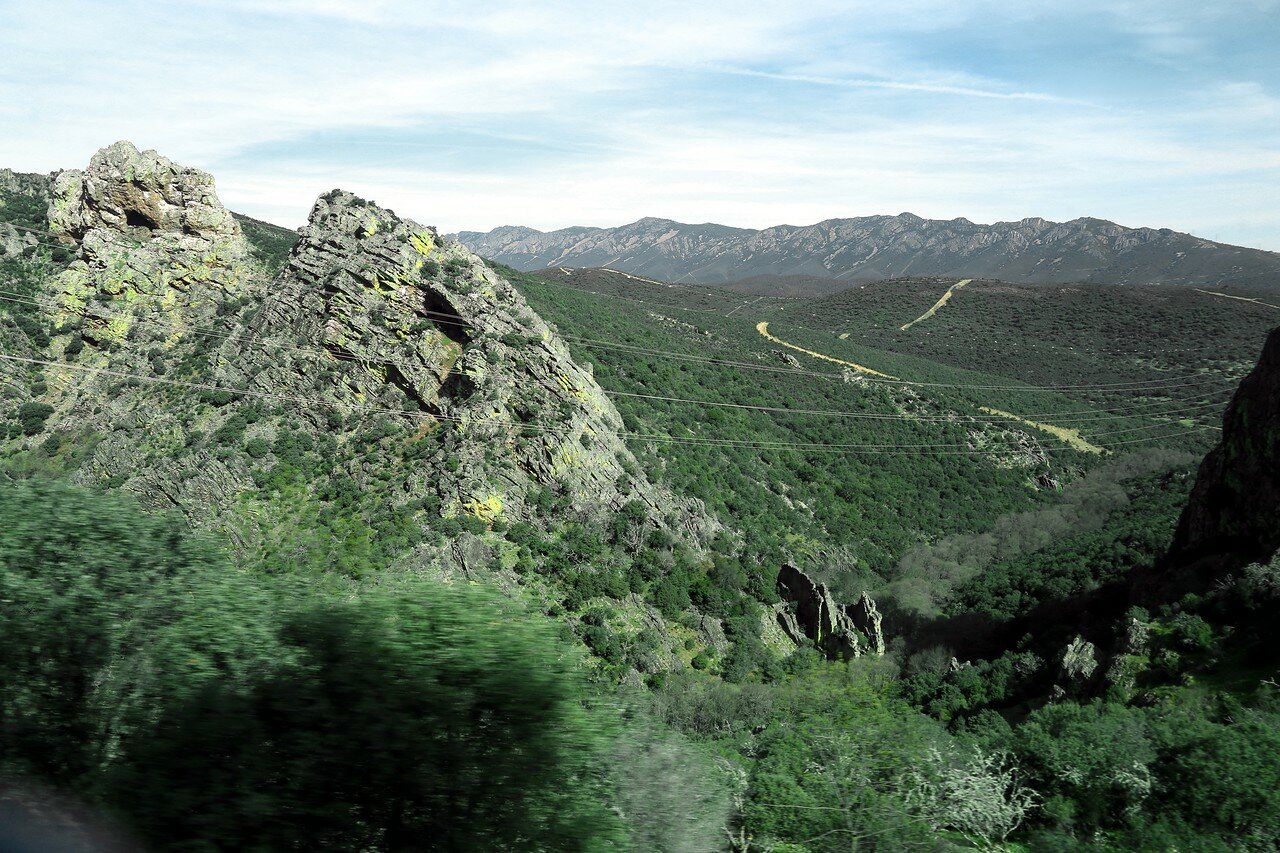 Behind the pass began to appear signs of human presence. 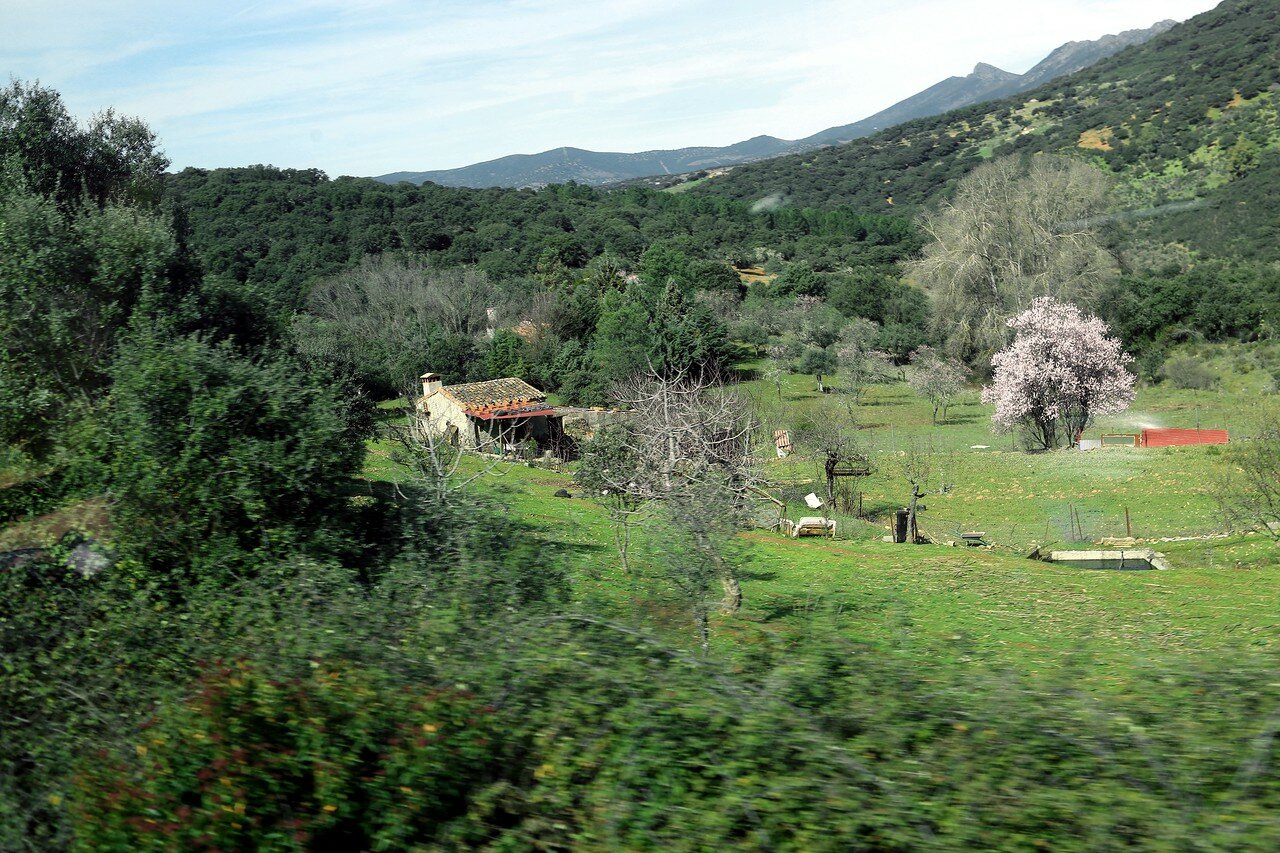 The area was like lowland, but looking at the navigator I was surprised to find, we climbed even higher. Behind the pass lies a hilly plateau. 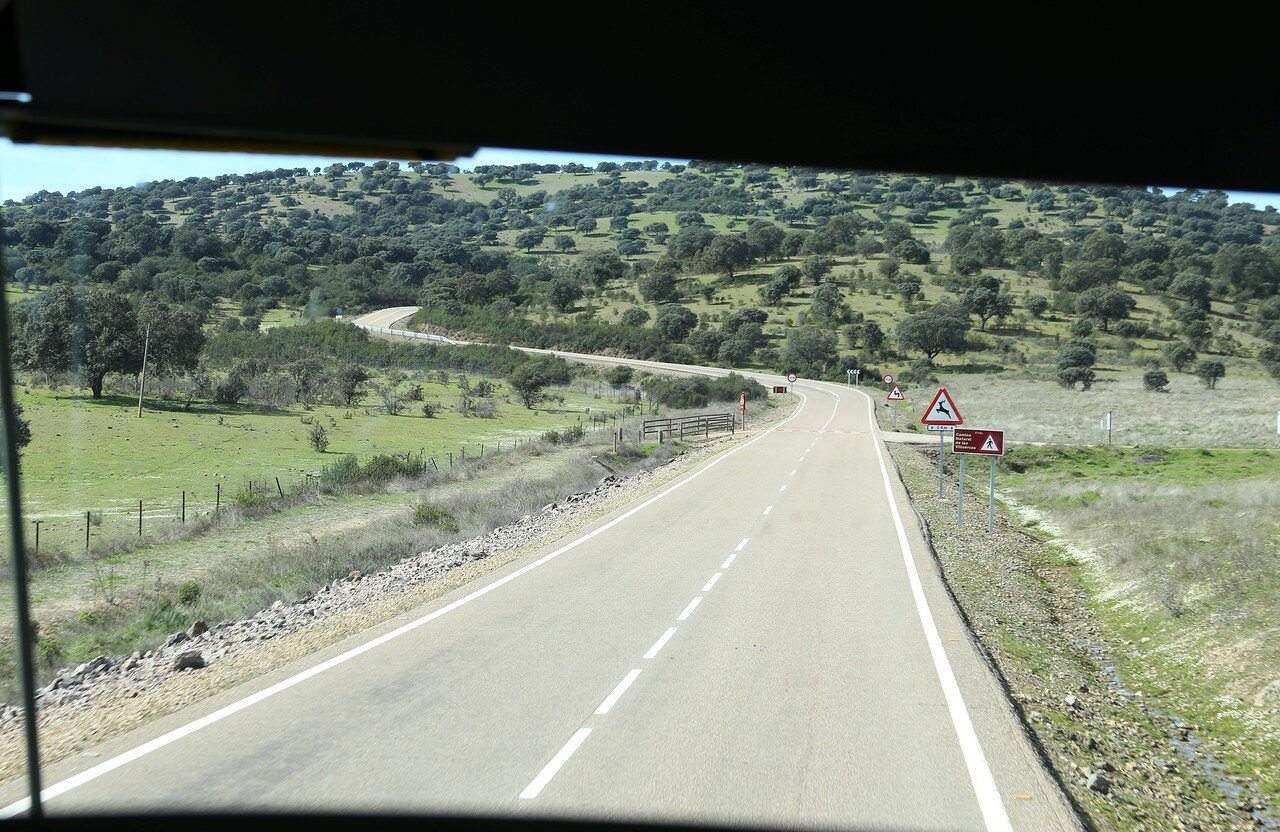 The first decent building for two dozen kilometers, guest house Valmayor. All windows are closed with shutters, the tourist season has not yet begun. 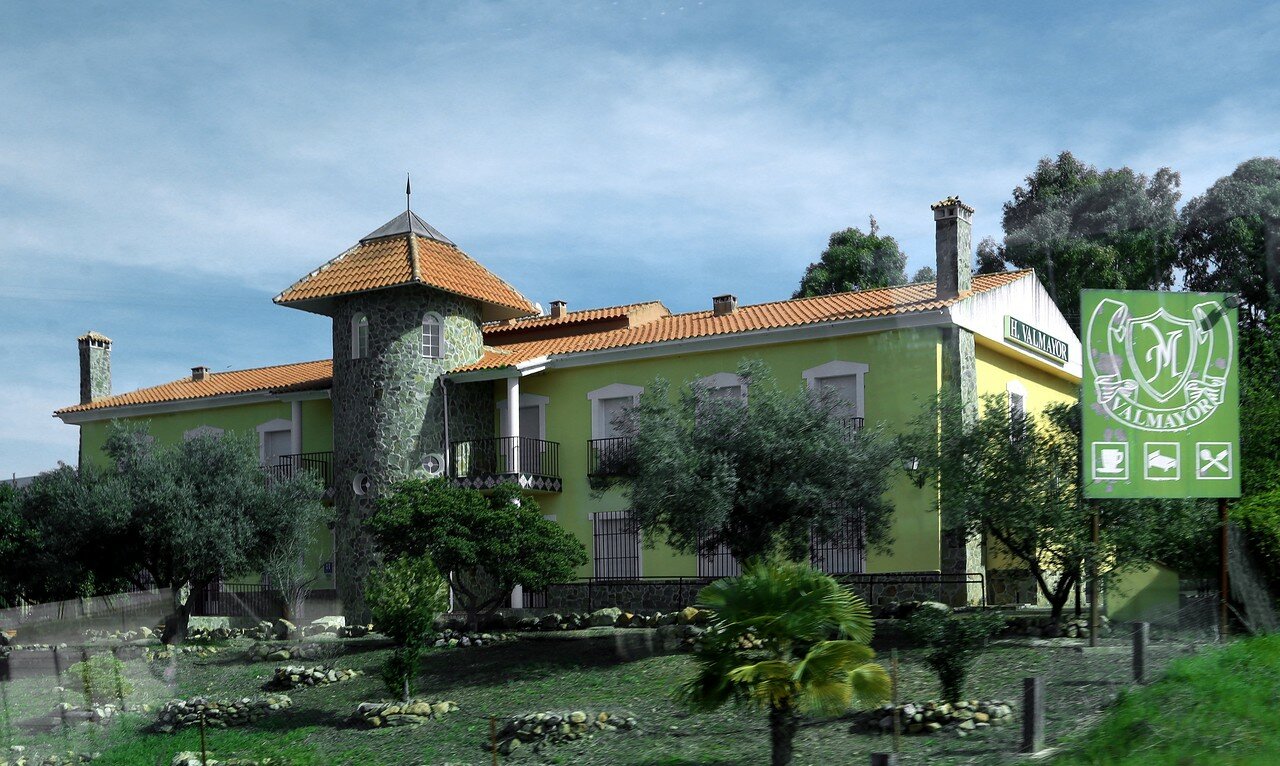 Herds of sheep graze in meadows with bright spring grass. 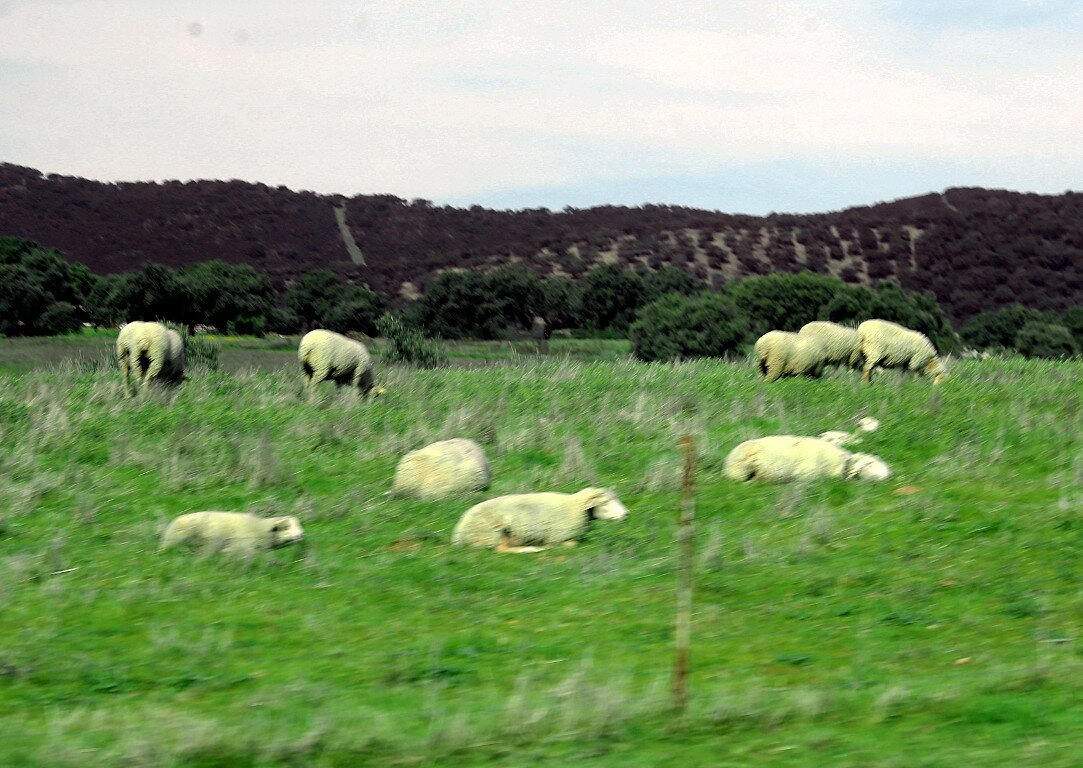 Further grasslands are replaced by plantations of fruit trees. 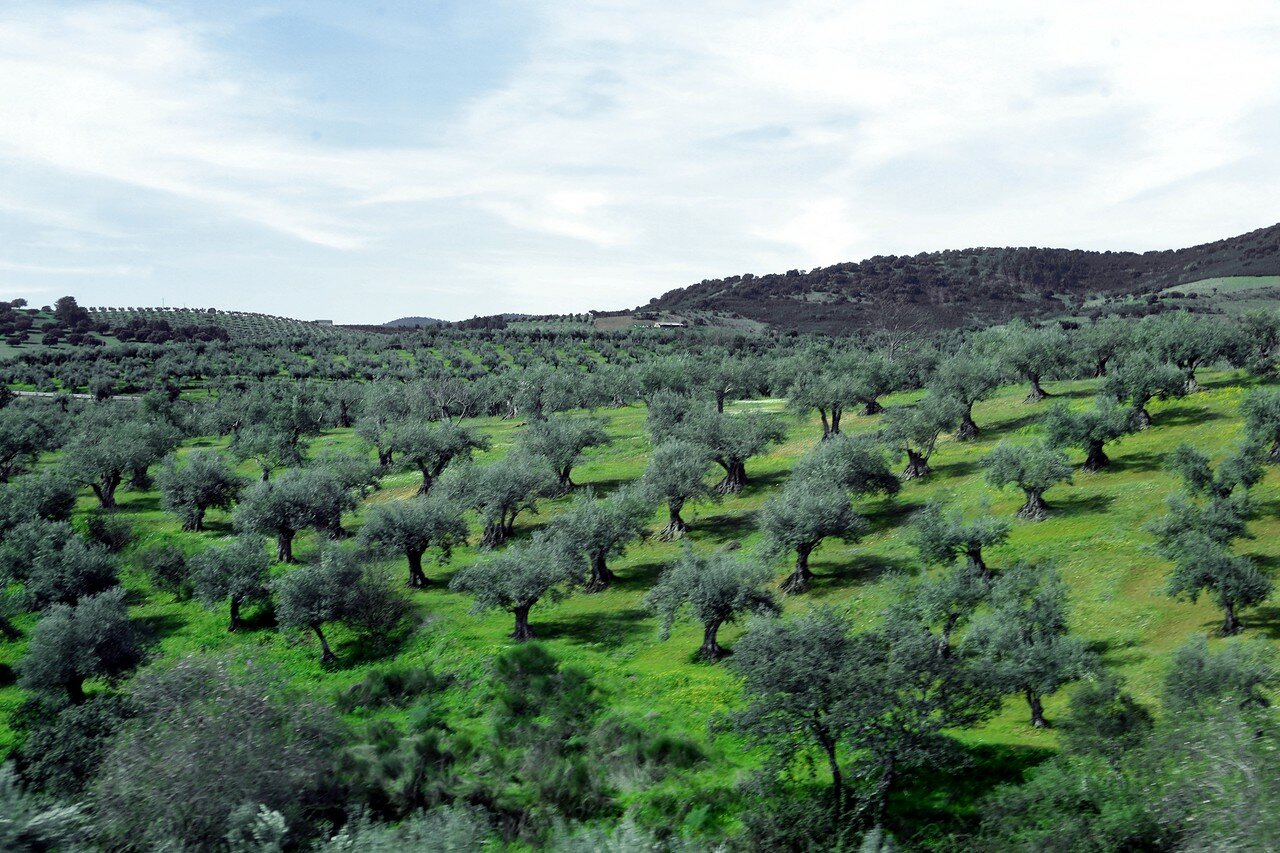 We pass under the high arch of the former railway viaduct. 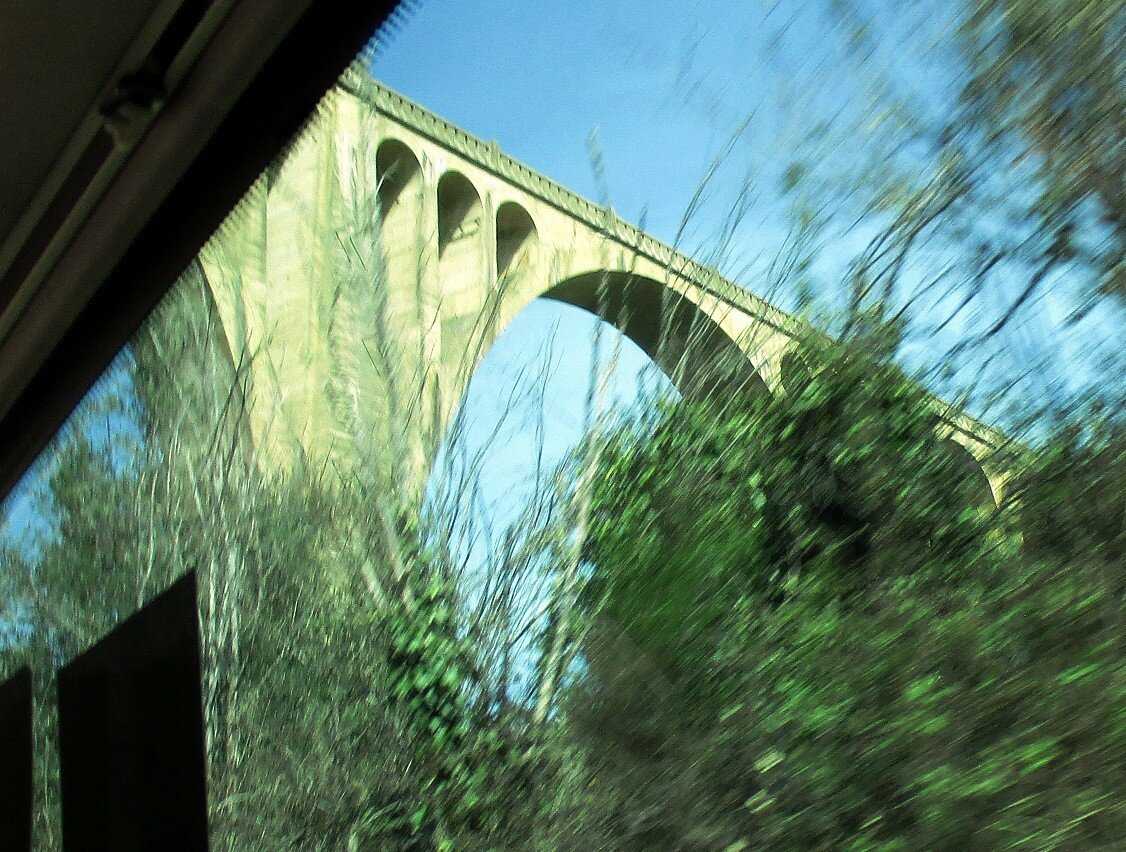 This bridge is one of the most interesting sites in Guadalupe. 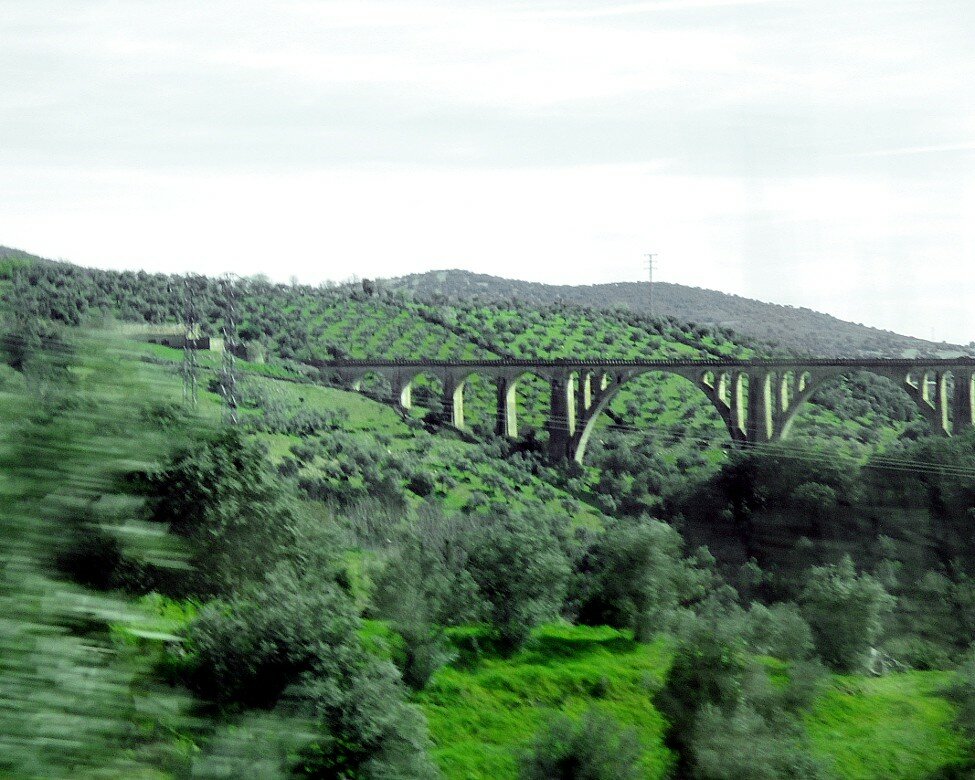 And here is the purpose of my today's move - a small town Guadalupe, famous for its Royal monastery, which rises above the city. 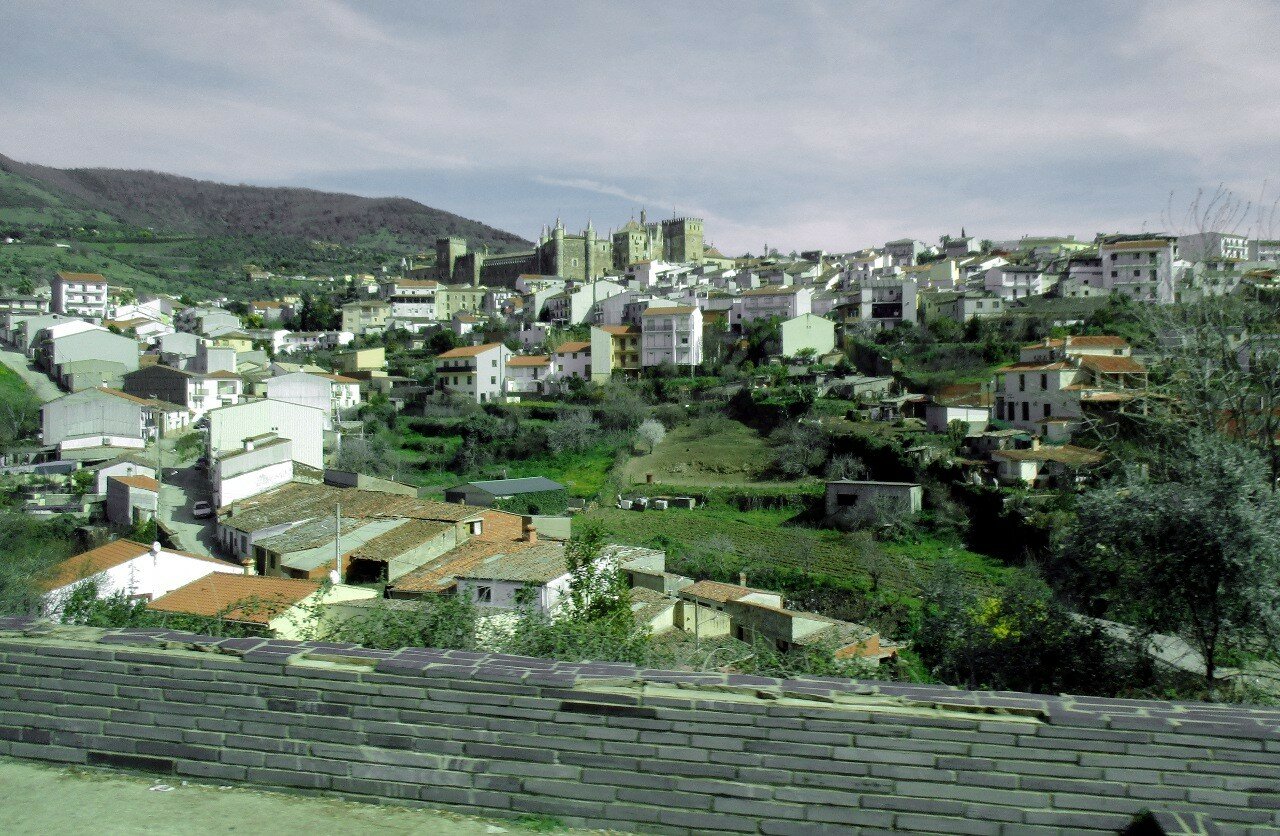